Today it has been a typical day of  garden maintenance. 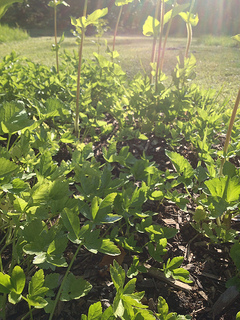 For a start, we continued our collective effort to eradicate Smyrnium. The Smyrminators, we call ourselves nowadays, having spent almost every morning from 7.30 to 10 clearing the various areas of the gardens from this highly invasive weed, which tends to smother the lovely bluebells (themselves a bit of a noxious weed...). Smyrnium plants need to be pulled out whole, including the tuber (which has a habit of lodging itself in between roots so that if you are not careful you'll leave it behind) or it will re-emerge, flowering (and setting seeds) low to the ground, difficult to spot and impossible to mow.

A biennial plant, it will require to be weeded again next year. In fact, young plants have tiny tubers, which are difficult to pull out. But there's plenty of them: they look similar to parsley. 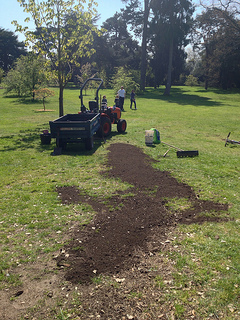 The second part of the morning, my colleague and I spent filling in a dip left by a tree that was removed a short while ago, and we sowed grass seeds to bring it back to lawn. From a frosty start, the day had turned lovely and it was a pleasure to work outside.

After lunch, I was given the task to rake lines in the gravel at the Japanese landscape: something new to me! There is a special heavy rake to draw those lines, which are meant to represent ripples in water.

I tried to approach the task with zen meditation in mind, but under the baking sun and with limited time to finish the patterns, my peace of mind turned rather soon into pressure... 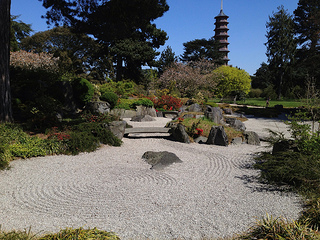 ... in particular as the landscape is a major tourist attraction, and there are always plenty of people around.
Most visitors are very appreciative of the raking, and often stop to have a chat. Seeing me all set on not leaving footprints, one visitor cracked into a joke: "Do you know you are not supposed to walk on the gravel while raking it?" That drew a smile: "I haven't quite mastered that yet!" 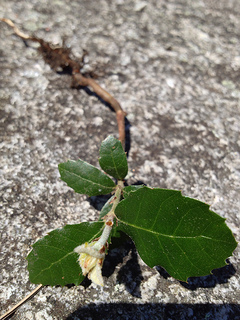 By then the task was complete and I had a little time for weeding. I do like weeding: the surprise of finding unexpected seedlings, and trying to identify the weeds I'm pulling, makes it more interesting for me.

My find for the day was a seedling of Quercus ilex, likely from the big specimen just outside the landscape. I had identified it just the other day, as one of the plants for my ID test.