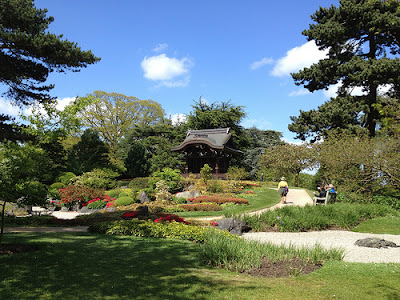 Have been around the Japanese gateway a lot in the last couple of weeks, as we were taking care of it temporarily.

As I described in previous posts, we mowed the lawn, edged the beds and raked the gravel. Some weeding needed doing too.


We've been talking about weeds, me and my colleague. How "botanical racism" might be at play, horticulture demanding of us that we get rid of the most successful plants from an evolutionary perspectives... and I found this beautifully written article just now that talks extensively about when a weed's a weed and why. It goes:


"Plants become weeds when they obstruct our plans, or our tidy maps of the world."

Definitions of weed vary: some of them refer to wild plants that grow out of place, others refer to any plant out of place, and weeds are called pernicious, invasive and noxious, these last two being official definitions of foreign plants, interfering with some human activity and environment or other (often a wrong of our own doing....). 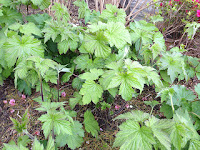 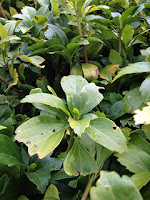 At the Japanese gateway two plants seem to have taken up weedy behaviour and outgrown their allotted space in what is a definitely planned, tidy landscape: Japanese anemone (Anemone hupehensis var. japonica) and Japanese spurge (Pachysandra terminalis).

They had to go and I spent all day clearing them. Difficult to do in the case of the first, a plant I love, but less so in the case of the second, which I find rather indifferent if not unpleasant altogether. Anyway, I was really surprised how weedy the Anemone actually was, with rhizomes reaching everywhere, as at home I have tried to get them established for two years now (with their white flowers that last into autumn they are such a good addition to an informal garden), but they keep dying, probably because it can get quite wet and waterlogged in winter at my place.

Because of the rhizomes reaching far and wide, I had to use what my colleagues defined "the stabbing" technique of weeding: with the tip of my trowel I chopped the rhizomes around some areas, then I teased them out and cleared with the help of a hand fork. They say it must be a uniquely Italian technique and joked about our supposedly passionate and murderous character. I have seen it done by at least another Italian gardener... so that might actually be the case! ;p

The outcome was satisfactory, though, what do you think? Here's the three cleared areas I worked on, taking the plants back to how they were meant to look:

There is one thing that might be said in favour of the thick carpet of Pachysandra: it is seemed to provide cover for a range of wildlife.