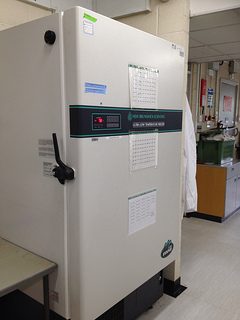 If it looks like a freezer it's because it is one. But it's a freezer unlike any other. It operates at temperatures around -80°C and contains 7.5 million samples of plant DNA, the largest collection of its kind. 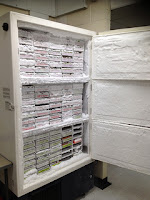 The genetics team in the Lab select plant material, they shake it up so that the cell walls break down and the cell nucleus releases DNA (much as they do in the Fungarium), then the soup gets diluted and stabilised for storage.

The stored DNA is available for researchers to order for their own studies. Only a little quantity, in the order of μl, is used for research, because it can be amplified when needed: that is why the freezer can contain so many samples! 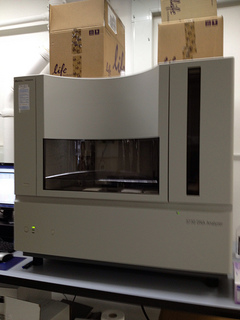 If further research needs to be done in the Lab at Kew, for example for conservation purposes,  the DNA will be fed into the analysing machine in the picture, which will produce a peak chart that identifies the levels of the DNA nucleobases in the marker under scrutiny.

If I understood correctly, sequencing the DNA of whole plants is too expensive, so what is done is identify a specific trait, for example related to photosynthesis (which is a characteristic shared by most plants), define a marker for such trait, and then  compare plants with one another and decide whether they are related and what is the evolutionary tree of plants families. A commonly used phylogenetic marker is the rbcL gene.


Because you don't have the whole DNA identified, you will be looking for specific primers that you know exist and enclose within them the marker of the trait you are investigating, and thus select the bit of DNA that you will be working on. I think this practice is called  DNA barcoding and sounds fascinating, although I'm not sure I grasp the whole concept thoroughly. One of the interns visiting with me asked whether analysing different markers would lead to different classifications, but apparently that is not the case, unless you are analysing hybrids from two different species and choosing a marker that is only derived from one of the parents (some, interestingly, are - another concept I cannot picture fully). 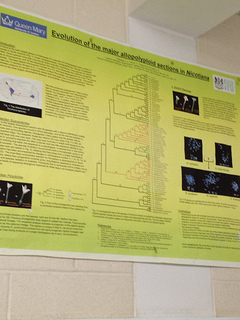 We were shown a posters of a project that our guide for the day had worked on himself. It helped classify the Nicotiana family of plants, which is distributed in various parts of the world. What the researcher were trying to establish was whether the plants had evolved separately after the continental drift, or whether they were dispersed (i.e. by man or birds) more recently. 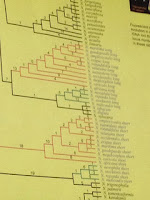 For those who are interested in the details, as far as I can see the paper was published in the Annals of Botany and is available online. The conclusion was that the plants must have been dispersed relatively recently, because the variation in the marker were too small between plants; if they had evolved separately over a long period of time, the taxonomic tree of variations would have looked much longer than it did.

Besides the genetics team, at the Lab they also have a  biochemistry department. 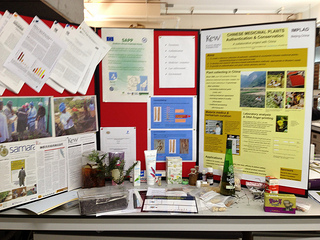 They help identifying plant's secondary compounds (that is, chemicals produced by plants that are not involved directly in their growth, but have some other function), for various purposes.

For example, they have worked with Boots the Chemist to check the plants they use in their Botanics range actually possess the properties they claim to have. 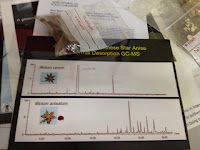 More importantly, identifying plants and their properties correctly can make the difference between life and death. For example, the spice star anise has a toxic relative: how do you know whether you are dealing with one or the other plant's product (i.e. when powdered) ? Kew scientists found a way: the technique called thermal desorption–gas chromatography–mass spectrometry (TD GC-MS for short), which produces a graph like the one in the picture - easy to spot the differences between the two plants' compounds, look at the peaks! 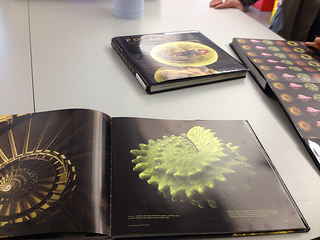 Also part of the diagnostic characterisation activities, Micromorphology studies the anatomy of plants parts including pollen (palynology, as it is called) through the use of powerful microscopies. It can have surprisingly artistic applications, as the books that Kew published on seeds, pollen and flowers (see picture) show, but of course the main purpose is scientific. For example, we were told that pollen is often the only plant part that is found fossilised in sediments, so identifying pollen is the way to understand what kind of flora existed at an archeologic site (the science of finding out being archeobotany).

Kew micromorphology research is also made available to the wider scientific community, for example through a bibliographic database. 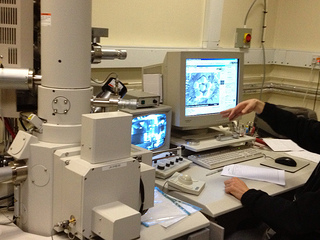 We had the opportunity to watch one of the scientists at work on some plant material: staining, coating with resin (so that sections can be sliced more easily) or other material, are necessary to prepare the samples... extremely complex and too much information to remember from a single visit!


The Lab hosts a cytogenetics department too. 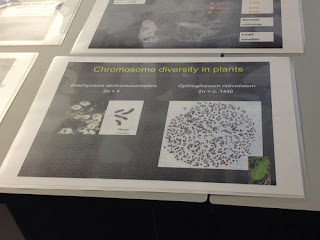 They study the characteristics of plants in terms of their chromosomes. Findings are really interesting: there is a huge variation in the number and size of chromosomes in plants.

Some have very small ones in size (the smallest ones occuring in thale cress Arabidopsis thaliana), others are big (the biggest ones are in the Japanese canopy plant Paris japonica). 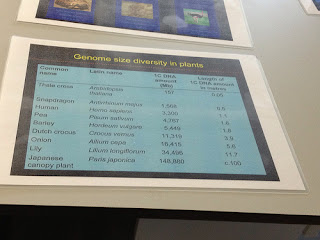 Some plants have few in number (for example Brachycome dichromosomatica only has 4 big ones) and some have hundreds (Ophioglossum reticulatum has 1440 small ones instead)...

By way of comparison, with 46 chromosomes human beings are closer to the side of few than lots, and, size-wise, we fall between snapdragon and peas...

However, no need to develop an inferiority complex yet: the size of chromosomes does not seem to represent the complexity of an organism. As far as it is scientifically known at the moment there are portions of the genome that might be redundant - what is commonly defined "junk DNA".  We might well, however, still not know enough: have a look, for example, at this article on what was discovered about fruit flies at Princeton University.

The tour ended with a myth dispelled: genetic research at Kew has mostly confirmed the pre-existing taxonomic classification despite a few spectacular cases of misclassification, for example the sacred lotus (Nelumbo nucifera) is more closely related to plane trees (Platanus spp.) than the water lilies it resembles in appearance. There is no rivalry between the Lab and the Herbarium. Both ways to classify plants are essential, and complement each other, especially as genetics is too expensive and complicated in many practical situations.

One of the intern colleagues visiting with me asked a last question on leaving: "Does Kew experiment with genetic modification?". The answer is no. The Jodrell Lab does what is called hypothesis-based science. A brief conversation ensued on the difference between science and technology... I get rather hot about that topic, and the post is long enough as it is... but I hope you enjoyed reading it!