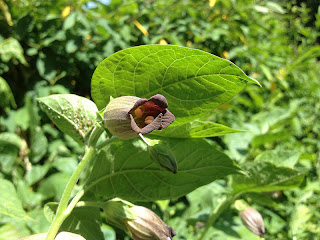 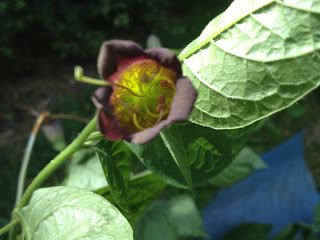 A little bit of research online did not provide a match, and my colleague also had no idea what it might be so I took the pictures with me at lunch time. Luckily we have a colleague who is a weed enthusiast and she identified it: Atropa belladonna, deadly nightshade, it is!

Of course I removed it straight away, because all the parts of the plant are poisonous to humans, they are neurotoxic. I knew the plant for its medicinal use in opthalmology, as in Italy they use atropine during eye checks to dilate pupils.

Round the corner, well inside the bed, another plant, under another Oemleria: obviously that creates the right environment. This plant was rather large and, once I had pulled it, I took a picture of myself with it. 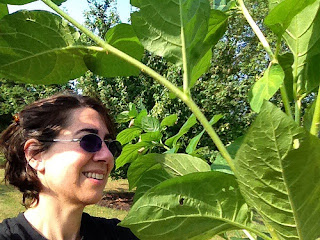 And I understood why it is so dangerous: the ripe berries are such a delightful glossy black that they are screaming: "Eat me!" at whoever happens to lay their eyes on them... 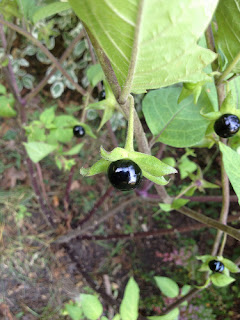 ... the plant is so poisonous that even the name of the genus derives from the mythical figure Atropa: the third Fate, who held the scissors to cut the thread of life*. The species name, instead, is from the Italian “beautiful woman”: apparently the juice of the deadly nightshade was applied as a decoction to beautify - which at the time meant pallid skin and dilated eyes...

Be careful if you find one, I only touched it with gloves on.