The Temperate House at Kew is closing on the 4th of August for restoration, and will stay closed for 5 years. On account of that, some of the plants will be propagated to be ready when the House re-opens, and the arboretum nursery is taking care of part of the collection.

So today I had an opportunity to take softwood and semi-ripe, tip nodal cuttings from material the Temperate House sent us, which was lucky, because most of the propagation in the nursery is done in autumn and winter, when plants are dormant. 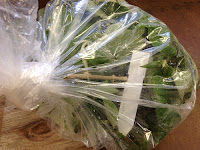 The material was collected by the Temperate House staff in the morning, before it was too hot, and put into sealed plastic bags to conserve moisture (so the cuttings did not wilt through transpiration) while being delivered to us. 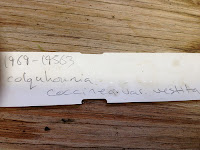 As soon as we received them, one by one we dealt with the bags of material, taking it out on our potting benches and selecting the best stems to cut. All the material was labelled with the plant name and its accession number. 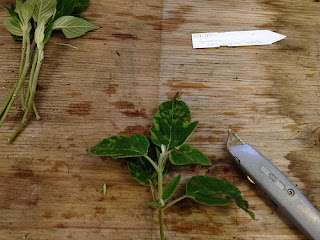 With a sharp blade, we mad a flat cut about 15 cm from the tip just under a suitable node (mostly to include some semi-ripe wood). Then pulled (or cut close to the stem, depending whether they came off nicely or peeled off some of the epidermis with them) all the leaves at the bottom. You usually leave only four at the top, so that photosynthesis does still take place and the cutting gets its food while putting out adventitious roots.

If you are restricted to material with any flowering tips on them (ideally you would get a non-flowering stem), the flower buds are best removed too, as they divert the plant energy from root formation (by releasing hormones). 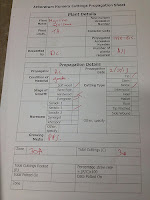 The cuttings were briefly dipped into an insecticidal soap solution to kill any pests, and they were thus ready for planting on the rooting benches. First, however, a propagation sheet needed to be compiled for recording purposes and to keep track of how successful the propagation has been. The form included: 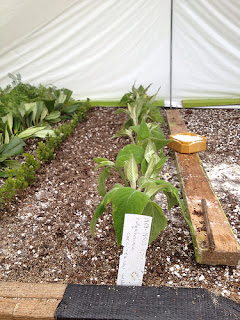 Once the forms were filled in, and all leftover material disposed of for composting, we proceeded to the benches, where we planted the cuttings in rows, after dipping them in the hormone rooting powder.
As the cuttings are different sizes and numbers, depending on leaves and nodes's structure and the amount of available material, we soon found out that it is quicker to lay them down in advance to determine spacing (not much is needed, by the way: I used to keep more at home). 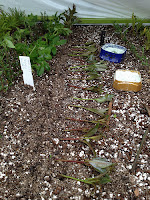 The bench is covered by a polythene tent to keep the moisture in and there is a heating pipe under the bed for bottom heat, which helps tissue to heal and roots to come out. The rule, as I studied it, is "warm bottoms and cold tops", so that the plant is encouraged to root before sending out more shoots, which (by requiring extra water and nutrients take-up) might put too much stress on the weak rooting system while it develops.

Day two at the nursery gone in a whiff.


Just a NOTE, for those of you interested in organic: hormone rooting powders/solutions are not allowed as they contain synthetic substances and fungicides. I hear that dipping cuttings in willow tea/water (water in which willow bark/young stems have been soaked) might help, as willow - an easily rooted plant - is rich in natural auxins. I have not used it but know someone that does, if you are interested in more.
Posted by M.Paola Andreoni at 08:58