Euonymus europeus, the spindle tree, with its characteristic bright pink seedpods with orange seeds sticking out, is a plant I have known for a while. I had it in my garden, I picked seeds from one last winter which I am trying to germinate, and it's in my next plant ID test.

But I had never known Euonymus fortunei. Or, rather, everyone knows it, it is so pervasive in gardens, only I had never know it was that plant. Before I potted on some 200 rooted cuttings, that is.

The most famous specimens are the variegated ones, coming with such cultivar names as "Emerald 'n' gold" and are so pervasive that I can see them in at least 3 gardens only in my road, including my next door's neighbour. Who, incidentally, the other day asked me what to do with some branches that were reverting back to plain green, as he had heard that it might spoil the plant.*

Here are some pictures of the specimens I potted on: 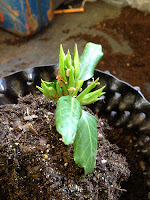 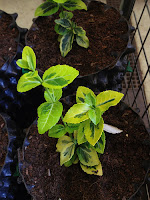 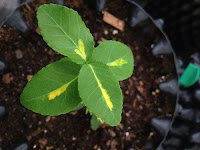 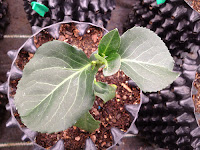 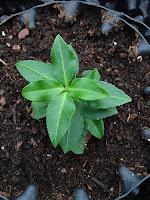 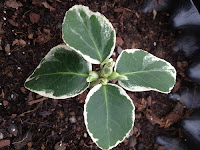 Some of the cuttings were flowering, with small, inconspicuous but cute green flowers, on cymose inflorescences (one flower at the end of each branch) with antisepalous stamens (in between the petals) and  green carpel with superior ovary (above the other floral parts). Like in the picture below. 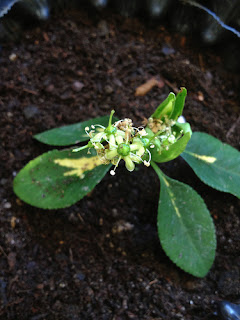 What do you think of this species?

I also potted on another Euonymus sp., not identified, which - I must say - was my favourite, as it was a bit more unusual and I found the little opposite leaves with white veins rather graceful. 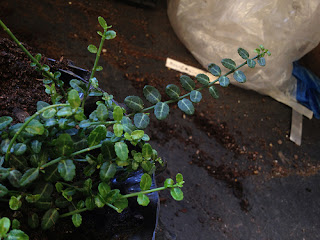 Note: *Variegated plants are usually derived from a sport, and propagated vegetatively. The variegated part of the leaf is not green, hence contains less chlorophyll and photysintesizes less effectively. As a consequence the plant is less vigorous. Reversion to the plain green form makes the stems more vigorous, and they may overpower the variegated ones.
Posted by M.Paola Andreoni at 21:38