Mastering the art of potting on (Week 14, Tuesday)

I have been potting on plants for a few days now, and, as you usually do, the more you do something the more you see what's wrong what you are doing, and get a better feeling of what you should do.

With air pots, I find there are two main tricky parts in potting on, and they are linked:

If you do not press the compost well, you will have two issues: the superficial roots will come out at the surface when you water, but not only that, the compost level will fall below the rim margin and water will start pouring out from the holes at the end of the cones, instead of soaking through the compost itself. Which is also a problem if you do not get the level of potting right, and conversely, if you plant too high, water will run off from the top of the pot, with much the same result. So you have to have enough margin to fill with water so that it can soak through the soil, not too little (flows out from the top) or too much (flows out of the holes). I found mastering this particularly tricky, because we have different generations of pots and some have larger cones, some smaller ones, or they have two rows of cones for a rim instead of one.

Anyway, while trying to improve my potting on skills, I have also tried to speed  up and while yesterday I managed to pot up 50 plants, today I managed 75! 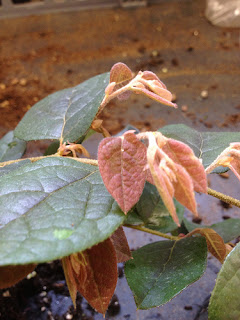 I myself have mainly been potting on Euonymus cuttings, but also helped colleagues with the pretty plant in the Hamamelidaceae family, witch hazel Loropetalum chinenses f. rubrum 'Blush', which, besides pinkish leaves and stems, also has pink roots! 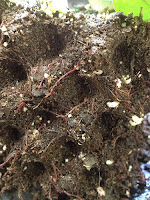