You know what I was writing the other day about the media breeding hysteria in the public about plant pests and diseases? I was going to write about horse-chestnut today (Aesculus hippocastanum) and I found this article in Gardens Illustrated, which by the way is supposed to be an interview with Kew's botanists, about the horse-chestnut leaf miner (Cameraria ohridella) whose first line goes:


The British conker is under threat due to an alien attacker, according to experts from Kew.

I am pretty sure they would not say that and yes, that annoys me, especially as the Forestry Commission's description of the impact on the tree goes:


Despite the poor appearance of horse-chestnut trees infested with C. ohridella, there is no evidence that damage by the moth leads to a decline in tree health, the development of dieback, or tree death. Trees survive repeated infestations and re-flush normally in the following year.

Rather helpfully, the RHS asks for the citizens' participation in a monitoring exercise to understand the pest and its effects better. And at Kew an experiment is undergoing, on which one of my student colleagues is centering her final project. One of the A. hippocastanum at Kew was injected some four years ago with a chemical against the moth. While the chemical is not active any more in the plant, it would appear that attacks from the moth are however having a smaller impact than they used to before the treatment... investigating why that is the case is what my colleague is doing. 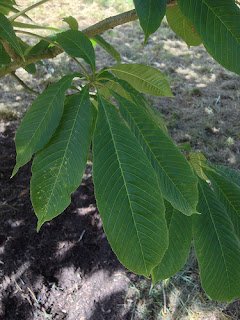 Anyway, today - team day - we were doing the tree circles around Aesculus, which triggered the idea for this post. Majestic trees, horse-chestnuts, and the damage of the leaf miner to European native A. hippocastanum is rather ugly to the sight, and can cause premature leaf fall.

In response to this new pest, it has been suggested to use alternative species in the garden, namely A. indica (Indian horse chestnut).

But the American ones are also attractive and do not seem affected.

Their common name is "buckeye", due to the appearance of the fruits: brown with a pale scar, like a stag's eye. 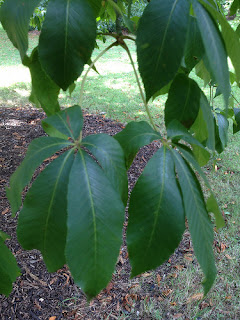 A. sylvatica (painted buckeye), a large shrub or small tree.

I found a description of the tree and its colour variations in the Falls Lake area on a blog. 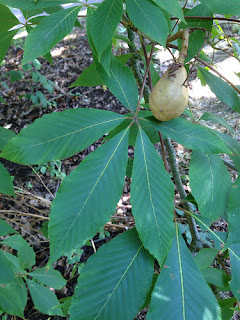 A. flava (sweet or yellow buckeye) is a larger tree, with yellow flowers, also described in the PFAF database. 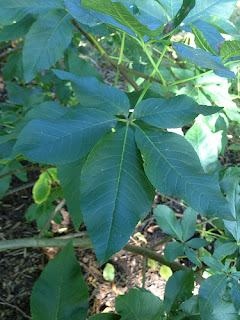 A. californica, which was still flowering, by the way, has pleasant, smaller dark green leaves. I noticed it a while ago while walking into the yard (next to which - lakeside - this part of the Aesculus collection is located; there are more Aesculus next to the Pavillion restaurant). 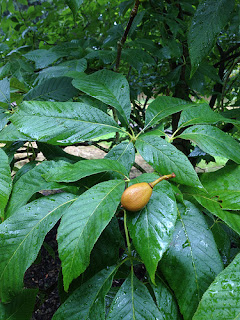 A. discolor a synonym for A. pavia (red buckeye) is a shrubby tree with red flowers 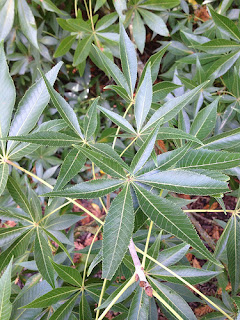 and my very favourite: A. glabra var. arguta (Texas buckeye) with rather distinctive, narrow lanceolate leaflets, that also look thicker and shinier (smooth, as the name implies), akin to an evergreen's.

About the seeds of these plants, I have read that the conkers are not as suitable for the namesake game from the other species as they are from A. hippocastanus. All, however, are mildly poisonous, as they contain bitter saponins (deer and wild boar do not seem to mind however), even though some species are eaten, cooked after leaching out the poisonous chemicals.

How easy it is to tell conkers apart from sweet chestnuts? Although I have never had any problems myself, I have seen people mixing them up, which is obviously not good given the latter is delicious raw or cooked while the former may give you a stomach upset.

I find sweet chestnuts are flat on one site and rounded on the other, mostly with a typical heart shape, point up, which sometimes terminates in a fan of hairs.

Conkers are rounder on both sides, and, in fact I have one here with me as I write. I have had it for a few years - in Italy the saying goes that if  you keep a conker in your pocket, it will ward off colds! That does not sound very scientific at all, but I like the smooth shape of a conker so I'm keeping it: it's as hard as a stone now! I wonder whether it would still grow if I sow it now...

... talking of germinating conkers, over these few months I have found quite a few seedlings and saplings of Aesculus in the South Canal beds (those and Juglans nigra's), so I suspect it must be the squirrels - obviously also immune to saponins!
Posted by M.Paola Andreoni at 18:32