I get a bit miffed when the media get hold of a piece of news and make such a fuss about it and breed hysteria just to sell more. As it was with fungus Chalara fraxinea, which causes ash dieback, earlier in the year. Now ask anyone about plants and they will know practically nothing about them but they will be intimately acquainted with ash dieback and the fact that this foreign-imported disease will kill all of the UK beautiful native trees...

I am told the same happened in the 70s with Dutch elm disease (so media-worthily shortened to DED) caused by fungi of the genus Ophiostoma. A friend was so surprised to see some elm seeds a while ago that she did not immediately identify them as such: she had unconsciously assumed there would not be literally any left...

It is indeed a serious matter when a new pest, disease or invasive species is introduced in a new area. And Chalara is a notifiable disease, so if you spot it anywhere in the UK, you have to report it. What annoys me is the tones, as if it was not our very own fault, the fault of human activity, that is. It often is. In this case, one of the ways into the country for the fungus was likely that we imported trees from foreign nurseries because it was cheaper than growing them here.

There are other famous cases of imported "aliens". For example in the case of Fallopia japonica, or Japanese knotweed, which was highly prized for its garden worthiness in times past - fancy that, we are today introducing, to deal with that problem plant, a pest that is non-native too: insect Aphalara itadori... suspending judgement on that. 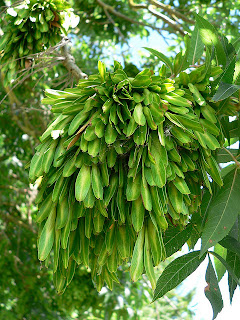 Anyway, apart from getting miffed, I have started looking around and spotting ash trees. Fraxinus excelsior is indeed a beautifully graceful tree, with dark pinnate leaves and bunches of winged fruits in summer and autumn.

Scientists across Europe are on alert and mobilised trying to find resistant specimens (there seem to be enough genetic diversity in the wild for that to happen) in order to understand what makes them so... they have also suddenly broken into the 21st century social media world by creating Facebook application "Fraxinus", to harness the power of the crowd in identifying gene sequences...


Back at work, today it was team day and we worked on the tree circles in and around our Fraxinus collection, so I had the opportunity to observe some close up. 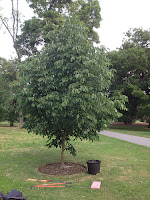 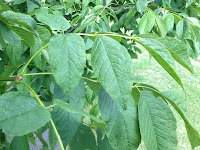 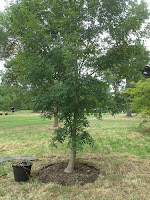 The first thing I noticed is that not all ash has black buds like the F. excelsior species: they are all actually quite different in colour, ranging from pink to orange-brown and to black.


A fascinating journey, literally through a world of plants, at the end of which I got to pick my favourite: Fraxinus ornus, known as manna ash, which hails from South East Europe, with its dark green foliage and bright green seed. It has beige buds. 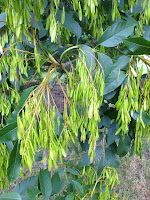 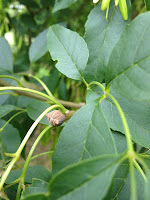