I am glad I only decided to tackle this bed now, with a few months of experience, because it is really daunting: Cotoneaster, Rubus and even Spiraea (canescens) seem to have gone really wild and taken over all the available space, growing tall, growing wide, getting one inside the other, thick and dense vegetation.

One thing that I will regret, though, is that I will never manage to finish this bed, and its stock-checking, if I want to do all the rest properly with one week to go and a few rainy days forecasted... Today was one of those and the frequent showers meant that it took me two days to cut back only one Rubus... my last one in Kew.


Well, one can only do what one can do, but at the end of the two days at least the Rubus diversifolius - a particularly nasty one, this one, I have been pulling bits and pieces out of my body all evening :( - looks like it should look once again. 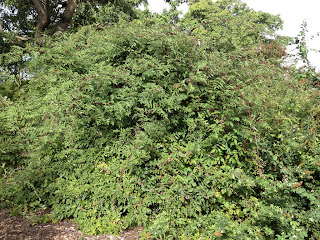 It looked like a large shrub, like a Sorbaria, when I first looked at it from a distance: thriving it was, more than any other Rubus I have dealt with so far, at some 4 meters tall and wide. Going round and round it, under Pyruses and between Spiraeas, I realised it had escaped from the other side of the bed and formed a solid wall through its whole width.


It had propagated by stolons, rather spiny ones to boot, that then died back (and spines on dead wood are even nastier) and remained there hanging, at head height, joining the clumps. As usual, the most recent canes were thriving, while the old ones (at the original location of the plant) less so.

Because the side it was thriving on is also the sunniest, and the bed is rather empty, I decided I would keep two plants, one at each side of the bed, and suggest in the stock-check notes that they relocate the labels (after verifying the plant, to be sure it has not hybridised). 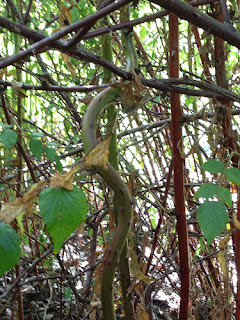 At the start, the task was so daunting I felt like asking for moral support from a member of staff at tea break.

Support given and gratefully received, I set out to sort this. Systematically was the way to go. 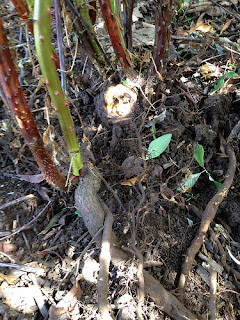 Some of those clumps of canes had developed rather large roots, but mostly they were shallow-rooted. One clump at a time, starting from the sides, had to be removed: cutting the canes at 1 m high and digging them out; carefully pulling away the bottom half holding it by the roots before untangling the top part of the branches from whatever they were clinging to, with the help of a fork. Carefully and slowly, to avoid injuries. 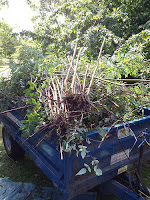 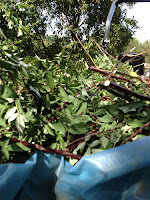 Last, but by no means the least complicated part of the operation, with the help of a fork and a folded tarp I had to load everything onto the tractor's trailer. Some 5 trips in all.

At the end of the two days, here are the plants as they look at either side of the bed.

The manager came round and told me that they are going to keep up the good job I've been doing... my departure is approaching fast.
Posted by M.Paola Andreoni at 12:16