The art and science of pruning (Week 18, Thursday and Friday)

There are three basic rules to pruning:
That's the basics. And thanks goodness plants are generally rather more resilient than the theory of pruning principles makes them, otherwise there would be so many dead & diseased plants out there...

... that said, plants in cultivated environments need some managing, in terms of

Pruning principles make sure pruning is done in the least damaging way for the plant. There are plenty of things to consider, and piles of books to describe them, but a quick summary could cover:


The biology of clean cuts and target pruning goes broadly like this.

Parenchyma cells are general-purpose cells with thin walls that form so-called ground tissue, filling in between other types of plant tissue. They are alive, and because they do not have a narrowly defined, specific function of their own, they can be easily repurposed by the plant to form callus when a wound is inflicted to it.

A jugged surface slows down callus formation in two ways: first, there is more surface to cover; second, if parenchyma tissue around the wound has been crushed, the plant does not have ready cells on the spot to repurpose...

Cambium and compartmentalisation of decay

Cambium is where plants produce new tissue. There are two concentric layers of cambium in a branch section: the cork cambium between the cork & the phloem, and the vascular cambium, that runs between the phloem and the sapwood. Cuts need to leave those areas intact: that is why we don't cut flush to the trunk any longer.

Where a branch joins the stem, the vascular tissue branches out as well to carry water & nutrients into it, and so does the cork cambium. These areas of branching, the branch collars, are where the plant is able to "compartmentalise" the wound: the way plants naturally heal. That works a bit like those sci-fi film spaceships that, having been hit by the enemy, shut out whole peripheral areas to save the core of the ship. Similar areas are present in the rootstock, where the stems join that come out of the ground.

If we do not cut flush to the stem and through the branch collar, the main stem will continue to work properly (so will the rootstock of ground branches). However, if a snag is left, the cambium in the branch may never manage to heal completely. Snags often die back to the main stem anyway, but in the meantime, the area will have been exposed to pests and diseases, with weakened defences, the damage possibly increased by moisture accumulating inside the wound. 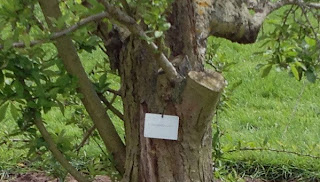 Sometimes, however, the collar is not clearly visible, it's rather long or the branch's angle to the stem is odd and not easy to work with. The risk of damaging the bark (which is a physical barrier to access by pest & diseases, beside containing cambium), and the cambium areas, is high.


So one might decide to make a cut perpendicular to the branch instead (so the wound has the least possible diameter), as close as possible to the stem, but leaving a little stump.

I found a rather good tree pruning guide from the Central Bedfordshire Council. My sources are first and foremost my colleagues, to whom I owe a lot, Brown's book on pruning (which they suggested, and that describes pruning plant by plant) and the RHS practical guide to pruning & training.

All of this to say that I had the opportunity in the last two days to have some pruning training and join in in a session on renovating pruning, in which Rossana explained about our historical collection of Philadelphus and its renovation programme, and then I got to try what I had learnt on a Deutzia that needed summer pruning (deadheading and formative pruning).


I felt rather a lot of pressure during the task, but I was satisfied with the result: the plant was airy, open in the centre, it had flowering stems for next year (Deutzia flowers on second year wood) and a pleasant shape, not weighted down by the massive seedheads from this year's flowering.
Posted by M.Paola Andreoni at 09:38