I have spent the last two days dealing with a massive plant of Prunus laurocerasus I had my eyes on since shortly after I started on the South Canal beds.

Bed 437-02, as it is known to the Kew-initiated, had two massive prostrate species of Prunus: laurocerasus and laurocerasus var. salicifolia. We had tackled the P. salicifolia with the 3rd year student earlier in the season, which took a little more than a day but was very satisfying to do.


The other day, after talking to my manager, who mentioned we should cut back all the plants that are straying into the grass, so that sward can mow the lawn without obstacles, I decided to give the other Prunus a go on my own, even though it was a bit daunting. It was useful in order to finish once and for all my stocktaking of the bed as well (I have already done the preliminary round here). 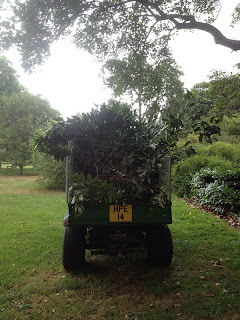 It took me two days, with the exception of some time spent weeding, and I still need to tidy up and rake the dead leaves away.

It was, in fact, a massive task, some 5 load-fulls went to the compost heap, and stems up to 15 cm had to be cut with a saw, so that I am pretty tired at the moment, but it looks so much better now: it's airy all around and no more Spirea are swallowed by the Prunus' overgrown branches - I'm proud of it and tonight I showed it to a friend that came visiting (poor thing, putting up with all my excitement for these plants, their shape and health!).

I forgot to take "before" pictures, except a couple, but do imagine it extended all the way into the Spiraeas on all sides... it was such a large area that I did not even manage to take proper panorama pictures!


P. laurocesarus is a plant I know well, as both my parents and auntie had it as a hedge all around their houses, and I have grown up with it. It is a very tough evergreen plant, whose leaves are very resistant to decay, and it grows so thick that it shades anything out. The one I tackled formed such a dense mat that it provided shelter for a range of wildlife: a badger sett and two old birds' nests is what I found... and I suspect there's more under the huge plant that is still left!

One thing that I did not remember from growing up, and that made me curious was that the stems I had cut were easily ringbarked, as the bark (epidermis + phloem) peeled off, leaving a rather smooth, and sticky, xylem surface. The phloem, on the other hand, was spongy and reticulate.