Today we went for a trip to the Royal Horticultural Society's flagship garden in Surrey, Wisley.

It is a beautifully manicured garden that I have had the pleasure to visit three times this year, with herbaceous borders by famous designers, trial grounds for plants so they can be judged for their garden worthiness and get an RHS Award of Garden Merit (AGM) if they excel, and - something that is really dear to my heart - an orchard (there's also a veg patch).

As this is a display garden, to show what can be achieved through best practice horticulture and quality plants, it is so different in both appearance and philosophy from Kew - a botanic garden, with scientific resarch for conservation of plant species at its heart... in fact, some of the differences include that while at Kew we display mostly species, at Wisley it's mostly varieties and cultivars, and that plants in the glasshouses at Kew are by region or family/genera, while at Wisley they are grouped in an aesthetic arrangement.

The gardens also started off much more recently than Kew gardens, as they date back to 1903 when the estate was donated to the Society.

After getting a tour of the gardens and the glasshouse, as I had already seen the (lovely) pinetum and the heather collection this spring, I spent most of the time in the arboretum and orchard - and what a delightful time, as the weather got nicer over the day.


An interesting thing we were told about the orchard is that it has an ailing collection of plums, which is being propagated, it hosts the national rhubarb collection, 100 varieties of pears and a whopping 700 varieties of apples! Several training techniques are sampled in the orchard, which is really fascinating: I would like to have a stint as a gardener there.


As you know, Malus, Pyrus and Prunus are plants I work with every day, but there is a difference when they are grown for their natural shape, which is of interest to botanists (as is the case at Kew), and when they are pruned for cropping (for example the height and shape of the tree)! Without mentioning the size of the fruit (and likely the taste...)

Engagement with visitors - for both education and entertainment purposes - is part of the mission of both Kew (where for example we are having the IncrEdibles festival this summer, to inform about edible plants) and Wisley, hence the displays and now they are trialling pick-your-own in the orchard, and are generally encouraging people to try (within reason) some of the fruit.


The health of the plants is obviously a concern, and H&S of course - for example, we often find kids (and not only the little ones, adults seem to want to have their fair share too) climbing up trees in Kew, and that is not good on either account...


At Wisley I spotted another Rosacea, which is so different from the ones I have in the South Canal beds: Potentilla thurberi 'Monarch's velvet'. It's a herbaceous perennial, with palmate leaves and red flowers. I had previously only seen deciduous shrub Potentilla with pinnate leaves and white or yellow flowers! 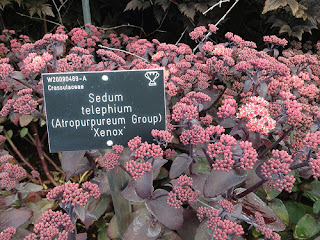 In the herbaceous beds, I found the use of dark leaves in the design quite intriguing, for example with the choice of dahlias and Sedum telephium (Atropurpureum Group) 'Xenox'. 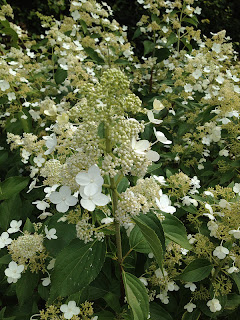 The loveliest plant for me was Hydrangea paniculata 'Kyushu' , so fresh, white and light, like lace on a summer's day... 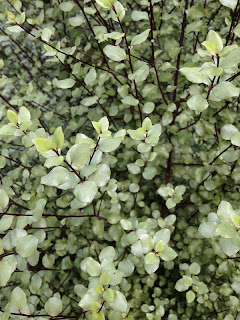 ... and the species that struck me most was a delicate, graceful Pittosporum tenuifolium 'Silver sheen', the only one (of the ones I know in the genus) that I would choose for use in a garden - that is because in Italy Pittosporum tobira (with dark green obovate leaves) is a plant most often seen around toilets and showers on the beach and as a hedge around seaside towns... that association would definitely taint anyone's perception of the plant's garden worthiness... but this one is so different, with its dark stems and silver ovate leaves with dark margins!
Posted by M.Paola Andreoni at 18:29