Today, being Monday, I looked for a soft start, and very conveniently I could refer to a chat I had had with my manager on Friday. A species Crataegus was reverting back to the rootstock, outside our area, and I offered to cut all the suckers. I have already mentioned how suckers from the rootstock may draw so much energy from a grafted plant to kill the species that was grafted on it. This is an example. 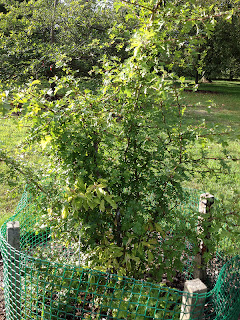 At first sight, this might seem a thriving, if slightly messy, little tree. But if you look closer, the leaves are not what they are supposed to be. This should be a Crataegus succulenta, with entire, serrated leaves (I know, because there are some around in the area. If I had not seen those, I would have checked on the web). Most of the leaves you can see are lobed, typical of C. monogyna, which incidentally is also the most common rootstock. If you look carefully, however, in between them, overpowered, are some chlorotic entire leaves... 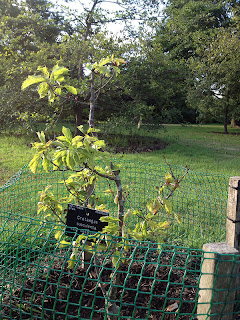 ... and after cutting back all the suckers, the species is revealed! Not thriving at the moment, it might need propagating, if we can get some good material.

After warming up with that, I started on bed 6 of 6, or 437-01 as it is called within the South Canal beds area. It is pretty much a solid block of greenery, mainly Cotoneaster and Spiraea, at the moment.

My colleague has cut the shrubs back to the edge of the bed already. If everything goes to plan, by the end of the next two weeks, most plants will be clearly delineated, so that I can stockcheck them, finding the labels and assessing the health conditions of the plant.

It was not a great start. Somewhat unexpectedly, as soon as I walked through the first shrub, I found a load of litter inside the bed. I hope it was not a human being ripping apart a bin bag full of stuff... but anyway, I had to do garbage collection as a first thing, which was not very pleasant, but now it's done; weeding of the front of the bed is also done, and a handful of shrubs have been cut back to their allotted space. No pictures, for the time being, all will be revealed in due course.

A couple of trips to the compost heap to tip my woody cuttings, and those of some colleagues I was helping with the tractor, and the first day of my last but one week at Kew was gone. Tomorrow is team day.
Posted by M.Paola Andreoni at 19:22