What a great weather today!

Crop updates, the pleasures of gardening.

I came to the UK almost 4 years ago.

Before that, had anyone told me that I would dream of spending an hour or so shovelling shit after a stressful day at work, or that having slipped with my work shoes in the above mentioned - I would feel all the better for it and arrive at home singing so loud: 'Sara, svegliati e primavera' (Sara wake up, it's spring, an Italian pop song of the 70s) that I surprised my husband, I would probably have believed them. Nor would I have believed anyone telling me I would wake up of my own accord one hour before necessary to be able to sneak out of work early...
I do sympathise with both foreigners and locals that do not see much of a fascination in gardening! However, it worked magic on me...
So many things happen at this time of year, and today it was really warm and sunny to boot! 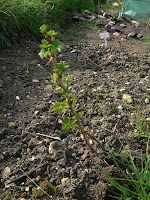 Watering seedlings every day is having an effect: the aubergines that I thought dead have timidly emerged - completely unexpected - and a closer look revealed that the spring-planted broad beans Express have come out with almost 100% reliability. Besides, most of the soft fruits are putting out fresh green leaves.
The manure is almost all spread and the ducks have not been back!
'Saaaara, svegliati e' primaveera... Saaaara sono le sette e tu devi andare a scuooola... ooooh Saaara...'
Posted by M.Paola Andreoni at 22:32